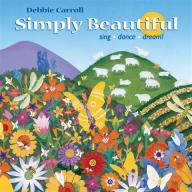 This release by children’s artist and music educator Debbie Carroll features traditional and original songs accompanied by fiddle, tuba, mandolin, Celtic harp, harmonica and even hurdy-gurdy. Guest musicians include Kathy Reid-Naiman, David Francey, Eve Goldberg, Sharlene Wallace, Ernie Tollar and others. Take a trip around the world with a bulging backpack of animal, sea, tree and travelling songs. Children – and their grownups – will want to listen again and again! Simply Beautiful for Merriweather Records was produced by award-winning Ken Whiteley.

“Canadian Debbie Carroll’s latest recording is true to its title.  Borrowing themes from nature and family, each song is presented professionally with accompaniment on instruments such as the mandolin, Celtic harp, fiddle, and hurdy-gurdy that enhances the pieces.  Her mature voice on the 19 tracks provides a calmness to each song.  Among the guest performers are David Francey and Sharlene Wallace.  Both traditional and original songs are included;  liner notes give a short background about the inspiration for the lyrics.  Among the action songs, fingerplays, and lullabies are “Jack Jingle,” “Which is the Way the Wind Blows?,” “Train is A-Comin’,” “Oats, Peas, Beans and Barley,” “Sailing,” and others.  The CD includes PDF files with the lyrics and actions to the songs.  An essential purchase for general listening and preschool collections” – Kirsten Martindale, School Library Journal

Jack Jingle / Red-Winged Blackbird / Simply Beautiful / Somebody’s Hiding / I Shut The Door / Love Is Like Glue / Which Is The Way The Wind Blows? / Train Is A-Comin’ / At The Bottom Of The Sea / I’m A Little Golden Bee / The Bee And The Bagpipe / Oats Peas Beans And Barley / Sailing / Shady Grove / The Tree Song / I Love You in the Morning / White Coral Bells / Baloo Baleerie / Here is the Mountain / Sing Me To Sleep (Susch Lullaby)