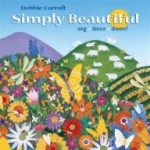 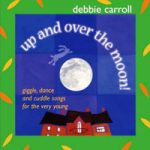 Up And Over The Moon 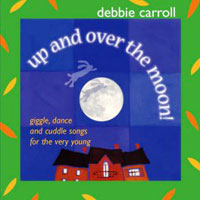 Giggle, Dance and Cuddle Songs for the Very Young

MDC03, 2003 | Includes 26 tracks and forty minutes of music for the very young. Songs and tunes are traditional and original, including themes such as animals, playtime, things in the house and the night-time sky. The CD comes with a booklet of lyrics and actions. Ken Whiteley, with his brilliant arrangements, immerses the collection in the influences of folk, gospel, blues, Cajun, olde-tyme, Celtic and world music. The result is a toe-tapping, sing-along, rockabye collection which is beautifully childlike, and which will be enjoyed by the very young and their grownups alike.

“One of the most difficult challenges in songwriting is to create a new song that has that feeling of well-worn and comfortable familiarity that so many old folk songs possess. This wonderful collection of old and old-feeling new songs is perfect for young children and their families. Debbie Carroll and her musical friends have created a thoroughly charming listening experience featuring clear and sweet singing in the best folk tradition, with an engaging variety of instrumental accompaniments produced by the versatile Ken Whiteley. Up and Over the Moon! clearly belongs in the company of the finest folk recordings for young children in North America.” Bram Morrison of Sharon, Bram and Friends